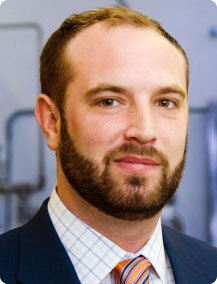 Aaron is a combat veteran who served nearly ten years in the U.S. Army. He entered law school with over five years of professional writing experience as a newspaper editor and Army public affairs officer. His work has been published in newspapers throughout the country, trade magazines, academic journals, websites, and government publications; he has received accolades from general officers, scholars, high-profile litigators, and even a federal judge. Aaron’s legal scholarship has been called “meticulously researched and brilliantly argued,” and BookForum showcased one of Aaron’s scholarly papers as an example of “rigorous and elegant writing.”

Aaron is as much an entrepreneur as he is a litigator: he is also vice president and general counsel for David’s Famous, a quickly growing ice cream start-up.

In law school, Aaron was executive editor of the Florida State University Law Review; research assistant to professors David Landau and the late Dan Markel; and law clerk for the Division of Florida Condominiums, Timeshares & Mobile Homes. His student note, “Ticky Tacky Little Governments? A More Faithful Approach to Community Associations Under State Action Doctrine,” was awarded Best Invitee Submission of the Year and published in The Florida State University Law Review. You can read his review of Clark M. Neilly III’s Terms of Engagement on the SSRN.

Order of the Coif

United States District Court for the District of Minnesota

United States Court of Appeals for the Fourth Circuit

United States Court of Appeals for the Eighth Circuit

United States Court of Appeals for the Ninth Circuit

United States Court of Appeals for the Tenth Circuit

The Qualcomm Case Isn’t Even a Close Call: Qualcomm Blatantly Misused Its Standard-Essential Patents to Restrain Trade and Monopolize Markets. By William Markham